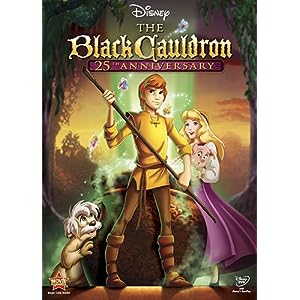 Released today, the 25th Anniversary of the Black Cauldron.

About:  Whoever releases the mysterious Black Cauldrons power will be invincible! The fearsome Horned King will do anything to possess it, but he is challenged by the most unlikely adversary: a young assistant pig keeper named Taran, who dreams of doing heroic deeds. With a motley team of the brave Princess Eilonwy, a minstrel named Fflewddur Fflam and Hen Wen, a remarkable pig who can predict the future, Taran embarks on a quest to stop the Black Cauldrons evil once and for all. Will he have the courage to succeed?

The 25th anniversary includes a digital remaster of the original.  Get the 25th Anniversary of the Black Cauldron for $13.99 on Amazon with free shipping

Previous Post: « Lose for Good & Help Fight World Hunger with Weight Watchers, plus a Giveaway #LoseforGood
Next Post: A Wine Club Specially Designed for Moms. What a Fabulous Idea! »