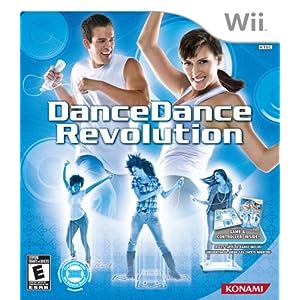 While I may scream if we have one more snow day this year, this winter we’ve discovered a new family game thanks to all of the snow days.  Dance Dance Revolution by Konami may not be a new game, but it’s new to us and there is a new Wii release for it.

This game has been around for 11 years but this latest release (November 2010) adds a Choreograph Style to the game.  In addition to having to follow the moves with your feet on the floor mat, the player uses the nunchuck and Wii remote to follow along with the arm movements as well!

It seems like a ton of fun but we’re playing using Classic Style – which is the floor mat only.  I figure once my coordination graduates to a level where I can actually get the footwork down, I’ll add the arm movements.  In the meantime, using just the floor mat is a workout!  I’ve been setting the game to Workout Mode on the days I can’t get to the gym and the kids join me and we’ve been spending hours playing the game.  While you can only have one player on the mat at a time, I often let the kids on the mat and I mimick the moves on the side to practice and workout.

You can also use the Wii Fit board with this latest release.  Check it out.  If you aren’t familiar, think of it as Guitar Hero for the Feet.  At least that’s how I’ve been explaining it to friends.  Get Dance Dance Revolution for the Wii for 68.99 on Amazon with free shipping.

Previous Post: « Don’t Forget to Join Me Virtually Tonight: 8 pm ET
Next Post: 25% off Everything Pink at Lucy.com »